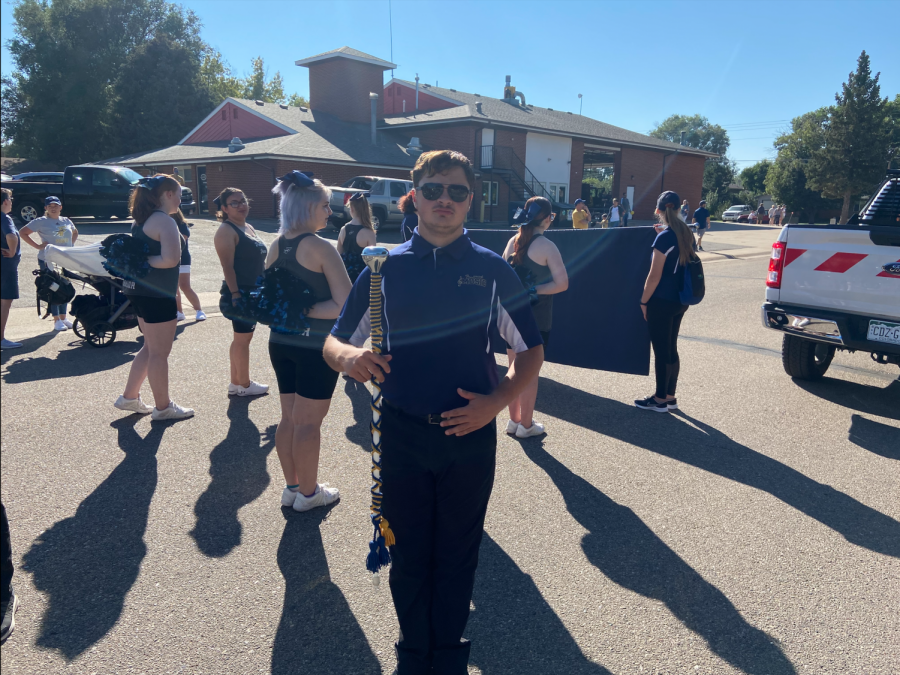 Levi Mays, senior at Frederick High and Drum Major in the Marching Band, prepares to lead the band through the parade at the Town Of Frederick’s Miners Day Celebration. “I would say [serving as Drum Major] has [helped me prepare to pursue my post-secondary plans because] it has definitely improved my leadership skills, and it’s definitely taught me how to handle people when I am in that role of a leader,” Levi Mays says.

This week, the Frederick High marching band will take the field for the first time this year during the Homecoming game. Yet marching band’s path to performance doesn’t happen overnight. Marching band began the first week of school and will continue until Thanksgiving. Coordinating the three-dozen band students is a tough task. Luckily, senior Levi Mays is up for the job.

For the past two years, Levi Mays has been the Drum Major of the Frederick High School Marching Band, but his time participating in band dates back to when he was in middle school. Levi is a senior at Frederick High and is using his last year of high school to lead the marching band to be the best that it can be. Levi has a great deal of experience playing instruments and is a seasoned veteran in the band program.

“I’ve played a lot of brass instruments. I’ve played trumpet, trombone, baritone, tuba.  Those are the ones that I’ve played in band, and I’ve been doing band for about seven years,” Levi says.

With all of his expertise in band, Mays decided to put his leadership and music skills to the test and become a Drum Major in the marching band.

“I have always loved music and so I’ve always wanted to produce it and that’s probably my favorite part about it is being able to produce the music,” says Levi.

In previous years, there have been two or three Drum Majors, but that is not the case this year. Levi is the only Drum Major this year, which, at times, can be a challenge, but Levi is willing to overcome that challenge to ensure that the band sounds as good as possible. Also, Levi has had to undertake even more leadership responsibilities within the Band Program this year, since Mr. Thomas, Director of Bands at Frederick High, has been out for a large portion of the Marching Band Season.

“I feel like the hardest part being Drum Major is not only the fact that I am the only Drum Major, and so I am kind of doing this alone, but that I have to keep the band together. I feel like that is the hardest part [because] everyone has their own ideas of what they want to do and it is kind of hard to be able to keep the band together,” explains Levi.

With everything that happens in band and all of the unique opportunities that band provides, there are so many opportunities to create new memories that last a lifetime. For Levi, learning a new instrument is one of many things that comes to mind when asked what his favorite band memory is.

Being in the marching band requires a lot of commitment to practices and performances outside of the school day, and with everything else going on with homework and life outside of school, it can sometimes be difficult to manage a busy schedule. Levi fits in band, homework, and much more by choosing which events to prioritize over others.

“I just plan around [activities and events at Frederick] because I like to prioritize band and other school events over things that I do at home and that’s how I make time for [band practices and performances],” Levi says, “[some] things I do outside of band [include playing] tabletop games, like card games, board games. The [game] I [play] mostly is Dungeons and Dragons,” he adds.

Serving as the Drum Major for the past two years has given Levi a look into what it is like to lead a band, and has helped him improve his teaching and leadership skills as well, which helped guide his decision for what he wants to do after graduation.

“I want to go to community college and then maybe [a] two or four [year university, and] I want to try to get an engineering degree for environmental engineering,” Levi says.

Levi is an incredibly skilled leader and a perfect fit for the Drum Major role in the marching band. Under Levi’s leadership and with his passion for music, the marching band has already become better than before and will continue to get better with each practice and performance. There is no doubt that Levi will be successful in pursuing his post-secondary plans with his strong leadership skills, commitment, and passion for music.