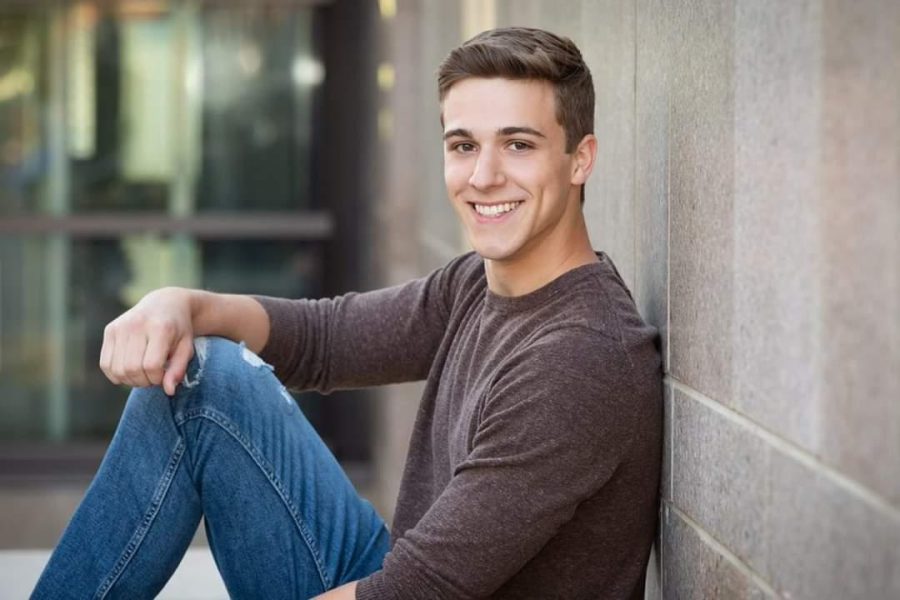 Thomas Beeker poses for the camera during his senior pictures. He will go down as one of the greatest performers to graduate from FHS

Know this upfront about Thomas Beeker: he hasn’t had a normal high school career. Thrown into the spotlight his Freshman year, he’s played lead roles in every single theatrical production of his high school career. Not that that isn’t something Thomas can’t handle. He has undeniable skill with performing–eloquence, technique, and mastery–that makes it easy to see how Thomas is one of the best to ever grace the stage of Frederick High School.

When did Thomas realize he had a future in performing? “I have always wanted a future in the fine arts,” he says. “But it wasn’t until high school that I realized it might be possible. Specifically when I performed Newsies on main stage at Colorado Thescon in 2018.” Thomas was just a Freshman during that show, but it did little to hinder his performance as Joseph Pulitzer, the main antagonist. He performed in front of the biggest crowd of his life: 5,000 people in the Bellco Theater in downtown Denver. When reminiscing on that magical performance, Thomas says that “hearing the cheers of that huge crowd gave me so much energy. I knew then that I wanted to do that forever. I was honored and lucky to be a part of that.”

To pursue a career in his love of fine arts, Thomas admits it has taken years of practice and perfection of his craft to get where he is now. “I work lots with my vocal coach, Carli Siders. I spend hours and hours for every show and performance I do.” All of this preparation will help Thomas in his aspirations to earn his BFA (Bachelor of Fine Arts) in musical theater. A challenging and overlooked aspect of acting is dealing with the pressure. However, this isn’t usually a problem for Thomas. “It’s all about having fun and inspiring others, so I don’t feel too much pressure.” As to his pre-performance rituals, he says, “Right before I go on I close my eyes, take a deep breath, say a prayer, and then it’s go time.”

Thomas’s acting career hasn’t been limited to the stage. In August, he and some of his friends wrote, produced, filmed, and edited a short film, Nobody. “The film all started with a single idea that just branched off into different plot lines and twists,” he says. “The tricky part was deciding which one we wanted to go with. Overall, it was lots of fun and I definitely learned a lot.”

As Thomas’s high school career is in its waning hour, it comes full circle. He caps it off where it all started: at the Bellco Theater. This time, he’s all by himself on stage. He’s one of the few to ever make main stage at Thescon for both group shows and individual showcases. It’s a flawless performance–the intonation, vibrato, falsettos–all of it jaw-dropping. He makes it all look effortless. It’s a testament to how much he has worked. “I remember watching the main stage performances my freshmen year and being so in awe and also, admittedly, a little jealous. I remember wishing that I could be that good. This year I truly came full circle. Hopefully, I was able to inspire people the same way I had been.”