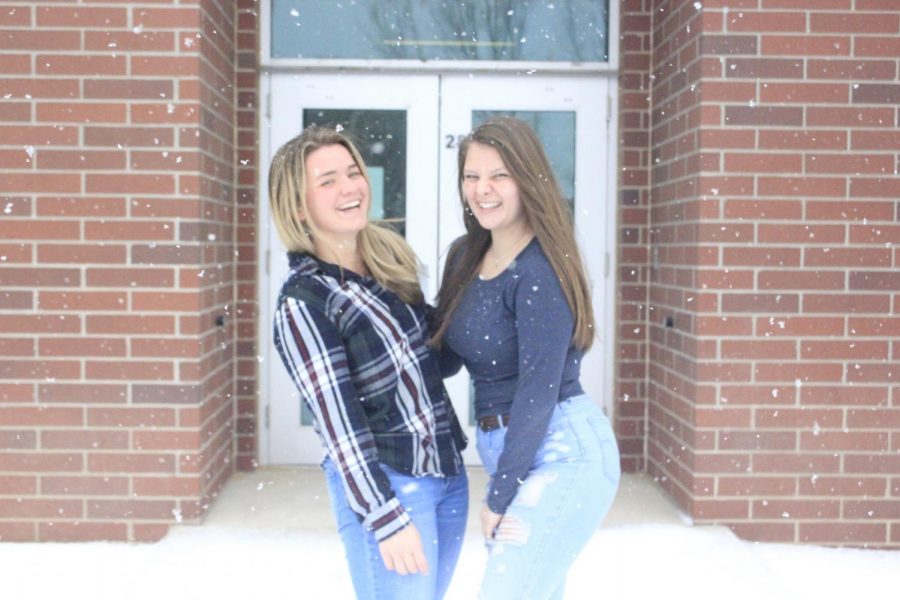 Seniors Carson Balman and Autumn Everhart giggle together in the blizzard. While the weather is harsh, the two hug together portraying their relationship. The two are laughing uncontrollably in the photo showing that they really have the most contagious laughs.

If they don’t make you laugh, at least they’ll be laughing

One of the closest superlatives was the “Most Contagious Laugh,” which isn’t to be confused with “Most Likely to Make you Laugh,” but might have the same effect. These two deserved the win and captured the votes with their charisma and giggles.

For seniors Carson Balman and Autumn Everhart, laughing comes just as natural to them as breathing. In fact, most seniors voted for the two because they say they never stop laughing. If no one laughed at your joke, don’t worry, if the pair is in the room, they definitely did. You can always come to them for a good laugh even when you’re down. When the pair were asked if they were surprised at the win, they said no. “I wasn’t really surprised cause everyone makes fun of my laugh,” Autumn giggled, “they [everyone] say I’m laughing all the time.” Carson agreed by saying, “yeah totally, I’m laughing all the time so they aren’t wrong.” Living up to the title, the two can make anyone in the room laugh just from them laughing alone. “If people aren’t annoyed by my laugh, they are laughing along with me,” Autumn commented.

“Literally everything. Anything at all it doesn’t matter.” Autumn sarcastically joked about how it doesn’t take much to make her laugh. “Hmmm..” Carson took a while to contemplate what makes her laugh but ultimately decided. “My stupid friends.” She jokingly remarked.

While the two are gullible and continue to laugh at pretty much everything, they both agreed that knowing each other makes their chemistry even better and every time they are around each other, it’s all laughs. “It helps that we’ve known each other for so long.” As the pair have known each other for as long as they can remember, so winning together wasn’t a surprise. Autumn surprised Carson with some old photos she’d found of the two a decade or so back, she told Carson that her mom had so many photos of them together and that it was hard to find the best one. “My mom found a super old photo of us from when we were younger!” They both reminisced and looked back at the photo chuckling. “How cute!” Carson remarked.

Though with hesitation and embarrassment, Autumn told us her favorite joke that never fails to make her laugh. Knock-knock,” Carson replied with, “who’s there?” Autumn continued with “interrupting cow,” “interrup-” and Autumn purposely interrupted Carson with a loud and enthusiastic “MOO!” The two laughed for about two minutes straight at the bland, yet still a classic joke. Autumn kept the pair laughing by adding to her previous joke, “mediocre.” The two immediately busted out laughing.

The two are known to be up for everything which makes their title even more fitting. When taking pictures for the role, it was a blizzard outside and the two were even excited about having to brave the cold for a picture together, helping prove their role as the winners for “Most Contagious Laugh.”