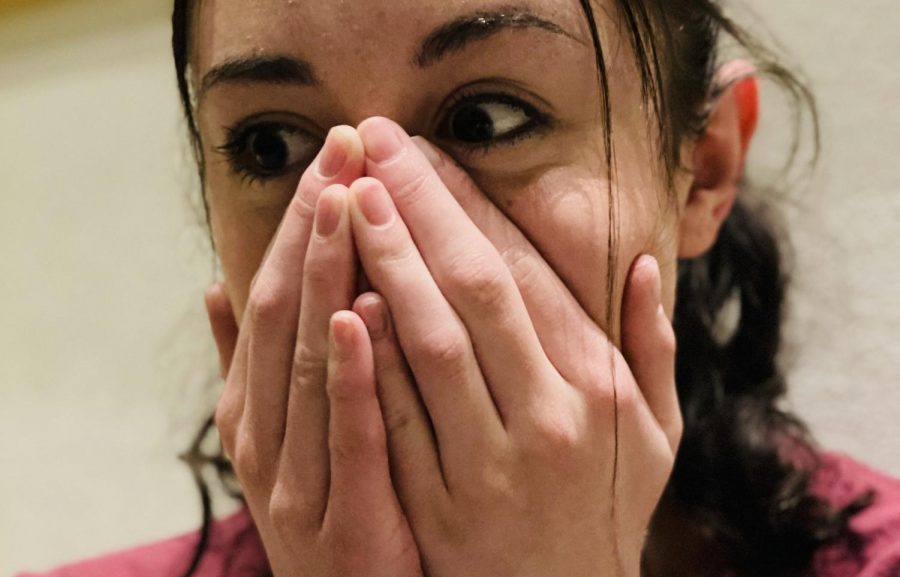 The sun blazed on our roof, turning the house into a scorching hot convection oven. August was not a kind month for our 100-year-old house. Any cold air produced by our pathetic AC unit would leak out of the thin walls and shaky windows leaving nothing but the humid air that makes your skin feel like sandpaper in the house. The only way my mom and I could cool down would be by wearing shorts and tank tops. Cold drinks didn’t hurt either nor did an ice bath or ice cream. If it was anything that would cool us down, we did it.

“Are you ready to go back to school, Monk?” My mom asked, trying to start a conversation

“UGH!” My head throws back in disgust. “Please don’t remind me of that.”

She laughs at my loathing before walking over to her keys which were lying on the kitchen counter.

“You wanna get some food? I’m starving!” She exclaims.

“Of course I want to get food! You do realize who you’re talking to, right?” I answered jumping up from my seat in excitement and grabbing my sneakers from their place next to the front door.

She nodded, and we went to the car to drive to Sonic. Windows down and the radio blaring Shania Twain’s “Man! I Feel Like A Woman” we danced and sang along to the song like the dorks we are. Despite the smoldering heat that can make anyone feel like they’re in the middle of a volcano, the 10-minute drive seemed to drop to a 3-minute drive. When we got there my mom pulled up to the closest parking spot and ordered mozzarella sticks, a limeade, sprite, and a caramel sundae. It was our normal and something that I always looked forward to when it meant a meal out with my mom. It took five minutes for our food to come but once it got there, we quickly resembled Kirby and inhaled our snacks.

The one-way streets in this tiny old town made our already short trip an even shorter trip on our way back. Within the blink of an eye, we were already home and goofing off in the kitchen. Making silly faces and some pretty dumb jokes that we thought were hilarious we laughed for hours at end only to stop when our stomachs hurt too much from all the laughter we created to laugh anymore. Eventually, we decided to try to intertwine our arms and drink from our cups. It seemed like a good idea at first but once our arms were thoroughly twisted, and I searched for the straw, I realized it was on the other side of the cup. Before I could stop myself from speaking, a word darted out of my mouth.

As soon as it left my tongue I could almost feel the bubbles burning in my nose. The tangy taste of the sprite and carbonation disappeared as I realized what I had just said. I could feel my face turning to Snow White, and my eyes widening as I focused on my mom’s face. The word I blurted out only moments ago is a broken record in my mind.

Granted, this was far from the first time I had ever sworn, but it was the first time I had done it in front of my mother. The same woman that raised me to be polite and the same woman who before now had believed that I had never sworn. I stood mortified and angry with myself and the fact that my filter didn’t catch it in time. I could feel my face growing redder and redder and my intestines beginning to tie themselves together in a perfectly tight knot. The plastic cup that I was holding nearly fell from my hand and collided with the fake tile floor.

The sound of my beating heart and thoughts racing overpowered the sound of vehicle engines roaring outside. It was so loud that I could’ve sworn you could hear it from a mile away. I couldn’t even muster out an apology. It was like my tongue was superglued to the roof of my mouth or even cut out from within my throat. I literally just stood there in the middle of the kitchen with a mortified expression plastered on my face, my eyes wide in fear and panic, and a brain that was racing a mile a minute. Now that I’m thinking back on it… I was a deer in headlights.

Even my mom’s kind and surprised eyes widened as she tried to figure out what to do. You could see the wheels in her head turning as she continued to try to process what had just happened. I watched her as the drink in her mouth almost escaped from the barrier of her thin chapped lips. She quickly swallowed her limeade and proceeded to start coughing, bending over almost as if she was choking. I would’ve used this and a chance to run, but my feet were welded to the floor and I wanted to make sure that she was all right. As my mind told me though I might as well have been a statue in a museum watching as people come by looking and admiring or staring in disgust. When my mom was able to catch her breath and finally stood up, I knew I was in for a lecture just by the look in her eyes.

To my surprise though, she started laughing. She wasn’t screaming, nor was she lecturing me, or even preparing to lecture me. No, she was genuinely laughing. I shook my head in complete shock while letting my mouth drop to the floor. A few seconds ago I was sure I was going to be reprimanded for my slip of the tongue. I must be dreaming. I mean my mom’s the type of person who will lecture you and teach you the right way to do things. She’s not a strict mom like most but for her to be sitting here and laughing? That’s not like her at all. I pinched my arm to make sure I wasn’t dreaming. Nothing changed. My mom continued to laugh at my failure with a hearty, sincere, and very catchy laugh.

“I am SO sorry! I did NOT mean to say that!” I sputtered, as I continued to try to grasp what was going on.

“That was hilarious!” She said, still giggling while trying to calm herself down enough to form a full sentence.

“I can’t believe I said that!” I confessed.

“I can’t either, but that just made my day!”

I stood there and let out a quiet laugh that showed that I was terrified of what was going to happen next when I was more so hoping I wouldn’t be grounded. Still a deer in the headlights for sure as I continued to stand frozen and confused. Why couldn’t I have just caught that? I’m so gonna be grounded! I listened as more and more thoughts raced through my mind.

“Am… Am I grounded?” I spoke quietly enough that she could just barely hear me.

My mom laughed again. “Why would you be grounded?”

My eyes opened wide, and my eyebrows arched in confusion. “Because I just said a bad word. In front of you!”

“Everybody makes a mistake like that in their life. It would be wrong to punish a person for a tiny mistake like that one. Especially since you understand it was wrong and you weren’t trying to do it on purpose.” she said while grabbing my hand and looking me in the eyes.

I was astounded! Not only had I gotten away with it but my mom also had a very sincere look in her eyes that told me she was being straight with me and that it was okay. I knew that if I was to say it again, she wouldn’t be as understanding and I probably would get lectured. So instead of testing my luck, I decided to stop for a while and just enjoy the fact that I made a mistake but it was okay. Plus I’m not grounded and would rather not take the chance of getting grounded.