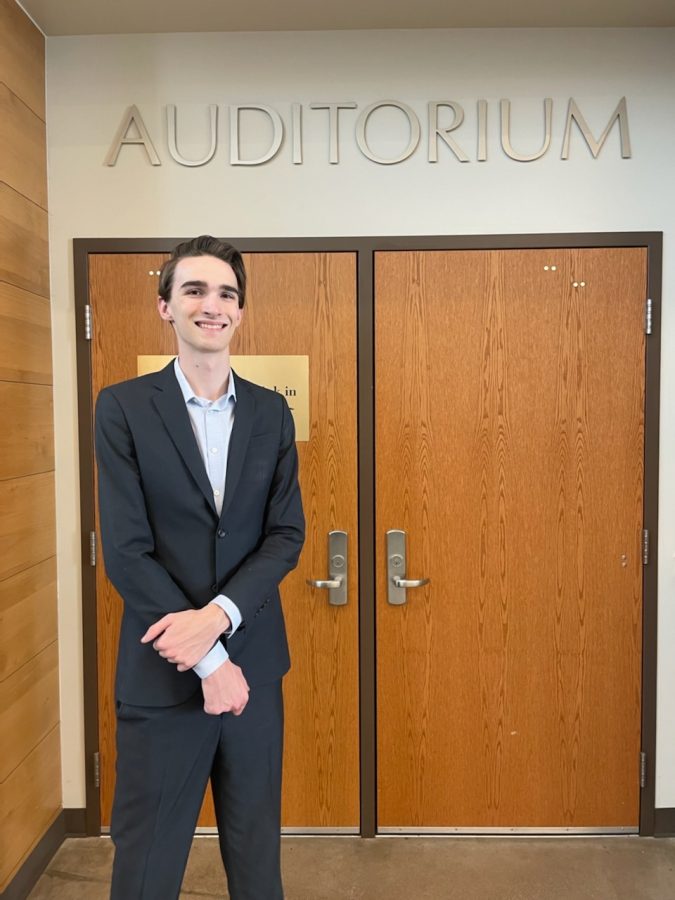 Curtesy of Will Greiner

Will Greiner is passionate about his work and hopes to take it as far as he can. He’s been in love with theater and all its aspects since freshman year and is ready to take on the next chapter of his life studying what he loves most.

WILL GREINER: The World is His Stage

Dreams truly do come true and Will Greiner truly has had the expirence of that in the best way.

Being successful is second nature for senior Will Greiner. He’s always busy and always working on his feet whether it’s in school or not. Will is passionate about everything he does and he constantly makes sure he’s perfecting his work. Will is not only a part of the theater as an actor he also works as the theater technician. Being a theater technician is something that really makes who he is and what he does with his life. “I’ve been a part of the theater program for the last four years and the parts I’ve most consistently enjoyed are the technical aspects of things. Running sound for various shows and learning how to do lights. It’s just been really cool for me to get to experience all these different aspects that no one really thinks about, but really helps bring the shows together.”

Will is even the lead theater technician here at Frederick high. “I am also the stage manager on this new program so a lot of what I’ve had to learn this year is how to manage everyone. It’s been a very difficult perspective that has given me more respect for theater technicians in general. Also for directors it’s a lot harder to manage all these things because instead of being able to focus on all the things that I need to do I have to look at what everyone else is doing and figure out from there how exactly I can make sure everything is done on time. It’s less of a skills management and more of a how and I’m supposed to make all this work sort of thing. It’s a balancing act more than a refined act.”

Being good at his job is just something he’s always been. Will has been able to bring his work and has been able to show how good he is at it. He’s been noticed from day one on the skills he has. “I was hired by the school district as a technician to work in any school. I’ve worked at Erie High School, Skyline, and of course Frederick. I’ve worked for professional productions of the Nutcracker and for events that involve the entire district coming together to do a fundraiser.” Being noticed has been the easy part for Will but everyday does come with a struggle because of the amount of work that Will constantly has to do. What’s it like being a student and employee at the same time? “It’s weird because every weekend I used to work here so I know the staff here a lot better than most of the other students and at the same time I know a little bit more about the building and how different things run here. It’s interesting to see the behind the scenes aspect that we never as students got to see. But it’s an interesting new perspective that has allowed me to appreciate a bit more of what goes on that we’ve never got to look at.”

But, working as one of the top stage and theater technicians it does have to come with some weird circumstances and even some awkward situations. “ One awkward situation is that as an employee at the district I am not able to work on any events that aren’t directly related to a class without getting paid. Normally I would volunteer for events like assemblies and for various choir events and band events and the other different musical things. But I’m not really supposed to do that anymore. So, the people who have come to expect that from me have to grapple with, Should I pay for him or do I get someone else to do it? It’s an awkward situation.” With Will being a student and an employee of the school district it is definitely something special and something that Will has worked so very hard to accomplish.

Will’s line of work is hard and leaves him with having to control and manage many different things sometimes all at the same time. Although some might think that Wills job is just doing the lights they are far from being correct bábese they dont see the behind the scenes of what he has to do for his job.

What’s the toughest part of your job?

“The toughest part of my job is making sure everyone gets things done on time. There’s a lot that needs to get done for every show but especially for Music Man we have so many different aspects that need to be done, and it’s my job that everyone gets them done on time. Which when I barely understand how many projects there are as hard as it is. But when we have things that come up that are unexpected or we have various other events like the middle school students all coming to tour our facility I have to be ready for that too. So I have a lot on my plate and that plate keeps getting more full.”

He is always busy but makes sure of course he finds time to hangout and have fun with friends and family.“In my spare time I do a lot of painting board games. I paint miniatures for board games, like small figures. It’s very fun and allows me to get some details that allows me to get some creativity out and get rid of stress.” Like DND kind of stuff? “Yea”

What do you do for fun?

“I do a lot of filmmaking stuff. I have written several short films and musical films which I’m working on with my friends. And that sorta helps me take a break from the hard work of trying to manage everything else, I just get to focus on the more creative sides of things that I’ve never got to before.”

Will also plans to go to the University of Wyoming to study engineering and theater technology. Do you plan on doing film things in college? “Yea, the plan is to just take some film classes up there while i’m working on my theater tech and depending on how that goes my transition over to doing a double minor possible in the future.” The future sure does seem especially bright for Will and all of his future hopes and dreams.

The past four years of high school for Will has been a wild ride where he’s been able to make the best of memories with the people he loves. Working with the theater program and making friends for life is the best part of all. “As a senior my favorite moment on stage was when I participated in the student directed One Act competition with Thomas Beaker, Alex Smith and Riley and it was one of the most fun days I ever had doing theater. Because for about two months I worked with both of my other directors and the cast that I put together to make the one act show. So i got to be a director for the first time, I got to produce my own show, I got to make all the creative decisions and really see behind another curtain and that gave me a better understanding for it and then when we finally got up there to do it, it was all the rush and drive that I got while being an actor and all the fun of being a tech. And, at the end of it all I won “Best Production” and got an incredible experience and a great honor which I probably will never forget.”

Will’s experience with stage and theater tech is like no other else. He’s worked to be where he’s at and has worked to get to the place he is currently at and he can only hope this moves along with him in the future. He should be proud of the success and inspiration that he’s leaving behind here at Frederick. Working hard is key and Will has been able to experience and learn so many things on his journey and will learn so much more in years to come.

“Being a technician is way more fun than you’d expect. When you go and watch a live performance or you watch a movie you’re only thinking really about what you’re seeing and hearing on stage or the music or acting side of things, you’re only focusing on that. But you don’t really see all the work beforehand. I’ve been an actor and a stage technician so I have a much different perspective on this than most people. I was the leader in the fall play and I’m now the head tech as well as I’m going to be on stage. So it’s a lot to juggle but, it’s definitely a lot more fun to be a tech than an actor sometimes because actors have to spend months and months rehearsing where stage technicians get a more easy start to the process or we just get to sort of plan things out and get going and work with the actors. It’s a lot easier to do stage work while the show is going on because you have everything planned out and you don’t have stage fright in the same way. So if you want to be involved in theater and you struggle with stage fright and you dont think that’s something you’re willing to do, stage tech is a super cool opportunity that still lets you be involved and put on a great show without having to deal with those other aspects.”So, if you’re looking for someone who you can be instantly inspired by, Will Greiner is the perfect person to look at. Although Will is most known for his success and his work can be recognized as being someone to show you to work hard to get better and overall be better. If you work for what you want you can get what you want and Will is the perfect example of that exactly.